While I do not yet have formal teaching qualifications, I have designed and delivered several corporate training classes. I am fascinated by good instructional design, and have the highest respect for teachers that are able to motivate students with interesting lesson content and engaging delivery, to yield effective and practical learning experiences.

I have particularly strong opinions on education policy, the educational process, and what makes people learn effectively. These views started forming around the age of 14, when I wondered why I had to learn complex mathematical theories which I was not likely to understand and even less likely to ever use.

Since then I have been increasingly conscious of my learning experiences: analysing the materials being used, the structure of the instruction, the method of delivery, the instructors, the general interest level of students, and the eventual outcomes.

Over the past year of developing Totuba, a business in the education sector, I have been fortunate enough to meet dozens of interesting people from around the world who are in some way connected with learning. Further, as my masters study is now conducted entirely online, I have had first hand experience with different online learning tools. These activities have further evolved my opinions and ideas for learning.

I have thought for a while that it would be useful to tap into student diversity at different institutions around the world – synchronously or otherwise – using the myriad technologies that are readily available. Having an opportunity to design a learning experience as assessment for an elective subject, I pounced on the chance to connect classes at two institutions to which I have exposure, and where it seemed the right people were in the right places.

And it was so: agreement was reached to connect a group of Chinese students learning English at Shanghai Jiao Tong University, with a group of Australian students learning Chinese at Melbourne’s Monash University. Two great institutions with great instructors who were willing to try something different. A cross-cultural exercise would transpire in the form of a role-playing game.

In setting out to design this learning experience, I kept the following in mind:

It should be noted that this project involved the coordination of no less than four separate stakeholders, two geographically distinct learning venues, and was conceived, drafted, proposed, finalised and executed within two weeks.

Two eLearning instructors, innovators and enthusiasts, who provided enthusiasm and support throughout the process, were able to mobilise a group of Aussie students on a Saturday at very short notice, organise a venue on the Melbourne side, and help run connection tests:

Three enthusiastic learning professionals with a connection to eLearning technologies, including the recent authoring of a paper on the use of web 2.0 technologies in the classroom, and involvement with Shanghai Jiao Tong University’s distance learning arm:

Conduct a fun cross-cultural class simultaneously across two countries, utilising Internet technologies to facilitate the learning experience. In this ground-breaker, The class should take the form of a game, conducted live in two geographic locations. The game consists of two point-scoring rounds with a bonus score accumulation opportunity during the first round.

In conducting the negotiation, teams must attempt to use as many of their designated keywords as possible.

Proposed pre-briefing (one class before the exercise):

Both sides will be given a game summary and explanation of the keywords. This may be delivered electronically.

Applying Gagne’s “Nine Events of Instruction” to this exercise

9. Enhance retention and transfer to the job

Chinese side: One instructor, seven students

I arrived at Ms. Borau’s class in the morning of Saturday 18 October 2008. I proceeded to conduct a 30-minute briefing session with the Chinese students, who were nervous yet excited about what was about to transpire. Realising that it would be challenging for them to catch the meaning behind many of the keywords assigned to the Australian team, we went through each in some detail. Australian Rules Football and koalas elicited quite a positive reaction.

The designated speakers on the Chinese side had prepared pages of potential conversational pieces for the game. While it was heartening to see that level of preparation at such short notice, the idea of the game was to be spontaneous and natural, like a normal transactional conversation between customer and vendor.

A Skype video call was initiated to start the day’s events. Fortunately, the biggest technical glitch of the day happened at this point, where both audio and video started to misbehave. After a ten-minute delay, another call was initiated successfully.

It was exciting to see the Australian and Chinese classes ‘facing’ each other (see image below). Formal introductions were made, followed by a re-brief on the day’s exercise. 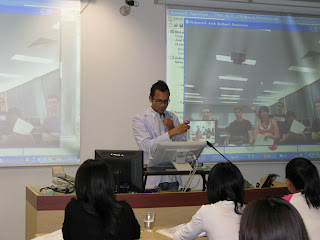 Both sides had seen the keywords prior to the formal starting of the game (against the prescribed rules but necessary given the short notice of the exercise). They were then advised of their budget limit, and given five minutes to finalise their preparation for the conversation.

Once the negotation between the two classes commenced, there was some adjustment necessary for the very slight time delay (<= 1 second) on Skype. Aside from that, the technology was behaving well. The Chinese side were quite shy leading into the exercise (expected), and the Australian side took charge of proceedings creatively (also expected). Both sides took the negotiation seriously, with Australia demanding a low price for their travel package, and the Chinese side dismissing it as impossible, retaining their price as high as possible.

Australia were innovative with the use of their designated keywords, and had used many of them in the opening few minutes. The Chinese side were extremely focused on using correct English, and coming up with the right answers to the Australians’ questions. As a result, they did not use any of their designated keywords by the end of the exercise. Also hampering the Chinese side was a now choppy Skype connection, which made the Australian side’s communication difficult for the non-native speakers to interpret (see video 3 below). Ms. Borau and I had to intervene to assist at that point.

Around 15 minutes into the exercise, neither side was budging far from their opening price requests, and received a friendly nudge from me to initate a final offer. The Chinese side relented and offered their minimum budget price, which the Australian side duly accepted, bringing the exercise to a conclusion.

A 30-minute interactive session transpired, in both English and Chinese. This was conducted in very good spirits, and the students appreciated the ability to talk directly with one another on more casual topics. The instructors had to guide some of the conversation, particularly on the Chinese side. Once the Australian side started speaking Chinese, however, the Chinese side were visibly more engaged and relaxed (see video 1 below).

Overall, the interaction during the game was up to expectations, and interesting to see the live reactions on both sides.

1. Chinese speakers in Melbourne eliciting a great reaction from the Shanghai students

2. Both the Chinese and Australian teams were driving hard bargains

3. At times, the Skype connection was being unfriendly

4. Finally, and upon the threat of no deal being concluded, the two teams agreed on a price

In terms of a winner, the Australian side came out on top, with the Chinese side failing to use their designated keywords. All sides were winners on the day, however, and the exercise has set a precedent for future such exercises, and many valuable lessons were learned.

Feedback from the instructors

Six questions were sent to the instructors on the Chinese and Australian sides to evaluate the exercise:

1. Knowing your students, how would you rate their enjoyment of the exercise? Did you have any direct comments from the students that you could share?

Ms. Kerstin Borau (Shanghai Jiao Tong University): They enjoyed it very much. It provided the chance to talk to native speakers, which is rarely given for most of them. If they communicate with foreigners, it’s mostly via email, so this was a great chance to them to actually use their English skills. Also a very good exercise to train their intercultural communication skills.

Dr. Scott Grant (Monash University): My students were very forthright about how they felt about the exercise. They openly stated they enjoyed it and thought it was a worthwhile exercise and could see the benefit in doing something like that again. One of my more experienced Mandarin speakers was even so keen that he emailed me and asked if anything similar could be organised during the summer break here in Australia and while I am in Shanghai.

2. How easy were the (simplified) game rules to grasp?

KB: “I don’t think my students really understand that they should use the keywords – next time we should give them an example.”

SG: “I don’t think my students had no problem with the rules – they seemed grasp them very quickly and were able to work within the structure/rules quite easily.”

3. Would you consider using similar game-style exercises in the future (if not already part of your curriculum)?

KB: “Yes, definitely. The advantages I see: it allows them to communicate with native speakers within a given frame, so they don’t have to come up with a conversation / questions themselves. Keeps the conversation going. The students enjoy it because it’s so close to their real life situations. Prepares them for real business deals.”

SG: “This is like a role play, but the innovative aspect of it is that each team while playing a role within the scenario responded to the situation very “naturally” in cultural terms – i.e. not like Australians trying to play Chinese.”

4. What do you believe could be improved for next time?

KB: “More time for communication between the groups of students. Maybe the students could prepare more questions and / or more topics on their own / the foreign culture.”

SG: “At this stage I guess the main thing is just where you physically place the camera – try not to move it around too much… I think also having the goals and objectives of the class set out in more detail (linguistic, cultural, etc) would be beneficial, and maybe some way of doing a formal evaluation by the students would be good too.”

5. Do you see potential to extend the exercise, incorporating the original game rules (multiple rounds, using multiple technologies such as Twitter)?

KB: “Yes, but I need to make this mandatory as part of an assignment. Maybe we need to come up with a whole “business concept” for our students – I like this idea because I think this would also increase motivation and class participation.”

SG: “Yes. I would include Second Life in this too. I would also suggest that if two groups of students are potentially going to meet several times in a semester or a year, that having a Facebook group for them would help create a sense of “community” and allow them further interaction outside the formal class setting that might be interesting to explore (share photos, daily life, etc).”